My favorite time of the year has finally come! Although it doesn’t feel like Christmas being sweaty and all everyday, there are many places you can still feel the holiday spirits in Bangkok. Not only you can enjoy this holiday season visually with festive Christmas lights in town, but also sensuously having delicious Christmas feast with your folks, even if you are far away from home.

My friends and I went to the Stable Lodge, a Scandinavian restaurant on Sukhumvit Soi 8 in Bangkok, in the beginning of December. Some of my friends from Denmark planed a Christmas Dinner Party together and about 20 of us gathered in this restaurant. When we went inside, the buffet plates were prepared on the table and they were ready to be served. I was so excited with all the food, because I had never had danish food or even Scandinavian food before.

Every one put a reindeer headband prepared on the table, now it’s time to start a feast. A glass of Chang beer on one hand (Yes, it was Thai beer.), we began to eat. I had some bread, meat, seafood, and many different kinds of fish cooked in a various ways. I put all of them on a slice of bread, and placed it in my mouth. Some of the food was salty, and the others taste differently. Savoring the combination of those in my mouth, I was satisfied at the end.

While enjoying our food, we exchanged Christmas presents and played some games. Listening to the Christmas music, we also enjoyed chatting and sharing our great memories of the year. Overall, I really enjoyed the time there. It was one of the most memorable holiday seasons of all. I already can’t wait for the next year! xD

Where we ate:Stable Lodge (Google Maps)

You don’t go to local university to get some food? Then it’s the time! Because they have varieties of dishes with relatively low price compared to local restaurants in the area. You can stop by whenever you get tired walking around. It’s a place where you can rest, make a plan for next, and then continue your adventure.

Thammasat University at Tha Phra Chan campus, where I studied for a year, is located in the center of the major tourist attraction area in Bangkok. You can walk to Grand Palace, Wat Pho, National Museum, and many other places. Being located beside the Chaophrayah River, you can also access via boat.

The main canteen is in the middle of the campus, along the river side. There are more then 10 restaurant right next to each other, serving different kinds of basic Thai food varies from noodles to Thai desserts. The price is around 30B (less than $1).

Since the price is lower than normal restaurant, the portion is a little bit small. However, you can enjoy a couple of plates at a time. You can order 2 or 3, and share with your friends. The variety they offer is pretty rich, and you will always find new taste. Being close to the major tourist attractions, this is one of the places you want to check out.

My first post on Wonderland Thailand is now available! Please check it out! 🙂

5 Reasons Why I Love Thailand

Going into the house

Sometimes you get bored with getting drunk by drinking bottles of cheap Chang beer, and just want to chill out. It was one of those nights when some of my friends and I went to this craft beer bar, Mikkeller Bangkok. After having delicious street burger at Sukhumvit Soi 39, we decided to take a good walk to the place. Eventually we came around quiet neighborhood, and voila! A cool Scandinavian-looking house was standing there.

Bar counter and a menu board

Inside the house, there were a lot of people enjoying their time respectively, chatting and laughing with glasses on their hands. There was a counter in the middle, and a big black board filled with different kinds of craft beer. I was overwhelmed by the variety they got: there were 30 of them!

I didn’t have no idea where to start, so one of the staff helped me with picking one. He asked me if I like bitter, sweet, or fruity, and I picked fruity. Then he handed me a glass and suggested to try. After taking sips of different beer, I decided to go for the one that’s no-so-strong mild-fruity. (Not sure how to describe the taste…)

We all picked one and settled by the table. Each one had quite different taste, and that was really interesting, as for the first-time craft beer drinker. With high percentage of the alcohol,  I got utterly drunk at the end. This time I could only taste a couple of different ones, but it would be fun to discover the one which perfectly suits the mood of the day.

Looking over the place from the bridge

On one of the very first nights in Bangkok, my friends and I went to Thai BBQ place by the Chaophraya river. There were roughly 15 of us from the same apartment as mine, and the owner of the apartment took us there. The place was massive, and crowded with a lot of locals. No wonder it’s popular among people, because you can eat as much as you want for only 199B.

You can choose whatever you want to eat from various kinds of meat, vegetables, curry, so many other things, and even ice creams for desserts. I was holding so many plates on both of my hands, taking as much food as possible, eager to try everything they have. They even have cokes and smoothies included!

Crowded with a lot of people

After we finally settled on the table, we turned on the heat of the pod, and started eating. We put meats in the middle, and noodles and vegetables in the water. While waiting for food to be cooked, we enjoyed our conversation, and had a great time.

What I chose for the first round

We were all so full at the end, and couldn’t eat any more. Some people played pool placed near the exit. I really liked the atmosphere of the place, and enjoyed being among locals, chatting and eating like locals. This is one of the reasons why I can’t stop traveling. I want to visit this place again when I come to Thailand next time.

Grilling meat on the plate

Bar counter in the middle of the restaurant

Do you miss proper dinner, delicious wine and cheese back home? Then here is the place to go. My friends and I went to Scarlett Wine Bar and Restaurant to have a farewell dinner together at the end of the first semester of my exchange. It is located on 37th floor of Pullman Bangkok Hotel G in Silom street. We are all covered in gorgeous dresses and tailored suits, and got in a cab.

After getting out of the elevator at 37th floor, we walked through the hallway and there was a huge wine cooler filled with different kinds of wine bottles on the one side. On the other side, I found a showcase full of delicious-looking cheeses staring at me.

Cheese in a showcase

We settled on the table, and wondered what to order. Everything on the menu sounds great, but I decided to have a special dish displayed at the entrance: Beef with oyster sauce and vegetables. My friends ordered beef stakes and tuna. We also picked up a glass of wine from the long list. (from 170B)

Food was so delicious. The beef was perfectly cooked and tender, so it melted in my mouth. It was the best beef I had ever had. Also the vegetables and mushed potatoes were really good. I enjoyed the taste of all at each bite.

We were all satisfied and extremely full at the end of the dinner. Although I picked up the special dinner which is slightly more expensive than other dishes on the menu, it cost less than $30 in total. Yes, it is expensive considering the price in Thailand, but if you pay that amount, you can have really good western dishes in Bangkok.

Where we ate: Scarlett Wine Bar and Restaurant (Google Maps)

Pad Thai, a Thai-style noodle, is one of the most famous Thai food in Thailand. At every corner, there are always street food restaurants selling this extremely popular dish. Every tourist has it during their journey. Pad Thai is one of the first food they remember the name and manage to order by themselves. Of course locals have it often. You will never find the restaurant which doesn’t have it on the menu.

Among all those prevalent Pad Thais, Thip Samai makes the best. It is located on Maha Chai Road, which is about 5 minutes drive from Khaosan Road. There is always a long queue in front of the place, including a lot of locals. Employees restlessly move their hands and cook each part of the process.

Many staffs cooking each part of Pad Thai

Thipsamai is famous among media in different countries

There are only a few kinds of Pad Thai on the menu. What I had is the one with shrimp and wrapped with egg (60baht). Unlike many other Pad Thais, Thip Samai makes it creamier and soft, using sweet thick source, and the wrapped egg makes it special. Being close to the major tourist attraction Khaosan Road, this place should definitely be on your bucket list in Thailand. 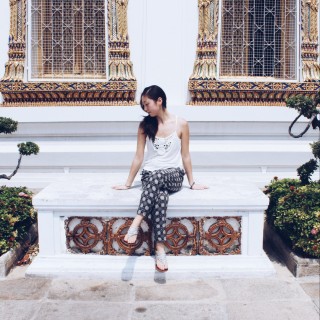 Hello! I am a 21-year-old Japanese, who loves to explore around the world. Felt in love with Thailand while my semester exchange in Bangkok and stayed there for 11 months. During the period, I explored throughout the country and I thought I wanted to share the experience, so I decided to start a travel blog. Currently I'm in university and traveling in my free time. Please follow my blog and enjoy exploring my future adventures! :)

There was an error retrieving images from Instagram. An attempt will be remade in a few minutes.